The AIA Document G706A ™ is the Contractor's Affidavit of Release of Liens. This AIA form supports the AIA Document G706™ in the event that the owner requires a sworn statement of the contractor stating that all releases or waivers of liens have been received.

The contractor is required to list any exceptions to the sworn statement provided in the AIA Document G706A™, and may be required to furnish to the owner a lien bond or indemnity bond to protect the owner with respect to such exceptions.

There was a time when the AIA contracts were considered 'the gold standard'. They were the best contracts that could be had without the expense of an attorney.

Unfortunately though the prices on these documents are astronomical - almost like the AIA thinks its forms aren't just the gold standard but that they're actually made of gold!

You're paying $50 for every contractor/owner contract you need on a project (3 projects would equal $150 - PLUS the cost of the subcontractor contracts you'll need) and those contracts aren't really designed to keep *your* company in mind.

*This website is not affiliated with the AIA® in any manner. Downloadable AIA® forms are available ONLY from the AIA®. 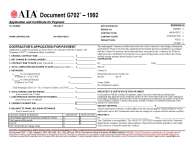 Stay current and get a special gift
Subscribe now!

ALL of your forms can now be electronic!


Click here to visit PDFFiller. You'll be able to upload any and/or all of your company documents, fill them in even if they're not already "fill-in-able", and easily collaborate with, and distribute the documents to, others.

The form(s) reside in your library at PDFFiller waiting for you whenever you need them.

Back to the top of this page: AIA Forms G706A Contractor's Affidavit of Release of Lien

Back to home page: InformedContractors.com

Psst: Look Who's Shacking Up Together!﻿